Buffalo Bill Days is rooted in local history, part of which makes Golden such a unique city in Colorado. The original event dates back to the 1940’s as a trail ride up to Buffalo Bill’s gravesite on Lookout Mountain. The celebration has expanded over the years and evolved into a beloved community experience including many exciting activities for the whole family.

The weekend kicks off with a Golf Tournament at Applewood Golf Course followed by a multi-day Arts & Crafts Festival featuring local Entertainment and Food Vendors, Parade, Muttin Bustin, and the ever-popular Car Show. This event is free to the public and open to all who want to join and honor the City of Golden. You can learn more about these events on our Activities page.

Buffalo Bill Days continue to carry on western traditions through an all-volunteer committee dedicated to preserving the history that Golden is so richly born from. As a nonprofit, the committee gives back through philanthropic endeavors such as a Golden High School scholarship program. Financial assistance is also supported through the help of the Golden Civic Foundation, Golden Backpack Program, and the Christian Action Guild.

If you have an interest in volunteering to keep Buffalo Bill Days a key event within the Golden community, please fill out our form or reach out to GoldenBuffaloBillDays@gmail.com for more information.

Buffalo Bill’s history with Golden began at a young age, when in 1860 he as a 14-year-old worked through here as a junior driver for the Central Overland California & Pike’s Peak Express Company, a subsidiary of Russell, Majors & Waddell that historians more generally give him credit for working for.  The reason he was here was to make money for his family after his father died in 1857 in part from complications from pro-slavery belligerents beating and stabbing him, as the family was abolitionist.  Cody could do this work because he was rather large for a 14-year-old boy.  His route took him through Golden and up Mt. Vernon Canyon, which is how he would’ve become first acquainted with Lookout Mountain.  Cody would’ve worked through here for a few weeks of maybe a couple months late in 1860, possibly beginning on October 12, 1860 when the firm’s mountain line opened.  The company’s local office was at the Miners Hotel at today’s northeast corner of 11th and Washington, where Cody may well have met Edward Berthoud, son-in-law of the hotel proprietor (Berthoud’s wife Helen might well have served him too, being one of the hotel staff).  The firm later hired Berthoud to survey potential routes in the mountains.  It was often called by the initials “C.O.C. & P.P.” which some had fun saying it stood for Clear Outta Cash & Poor Pay.

The Wild West Show never came to Golden (we were a pretty small town for that), but it did advertise here, including a full wall mural sign on the side of Standley Hall that stood across from the Astor House (a photo at the Golden History Museum shows it pretty much completely).

Cody returned to Golden on December 8, 1907, this time not driving a horse, but driving an automobile.  He was taking a trip down memory lane, retracing his old route that took him up to Idaho Springs.  Although Cody was known to make up things he did this one received very minimal publicity and he doesn’t appear to have been seeking it; he was simply taking a drive for some fond memories, taking an hour to eat at the Avenue Hotel (still standing at 1211 Washington, Spirits in the Wind’s building).

After the Wild West Show shipwrecked in Denver in 1912 its workers, stranded in the city, were soon hired by Denver to help build the Lookout Mountain Road, then under construction for the Denver Mountain Parks.  The part they would’ve worked up would’ve been up Mt. Zion and across Windy Saddle.  It’s possible Denver hired them through Cody’s influence behind the scenes; Denver definitely needed the workers, the stranded show workers needed work, and it’s the kind of thing Cody would do to try arranging that for them.  Little did they know they were building the road that would one day lead to Buffalo Bill’s final resting place.

Upon his death in 1917 alternate sites were proposed for Cody’s gravesite, Castle Rock and Lookout Mountain.  His wife, sisters, daughter Irma and ultimately Johnny Baker all said Lookout was where he wanted to be buried, and sister Mary Decker selected the site.  Cody, a Mason, was buried there under the auspices of the Golden Masonic Lodge on June 3, 1917.  Its attendance of 25,000 people is still the 2nd largest crowd in Jefferson County history today.

Fittingly enough Cody returned for good around the same time the buffalo returned to Jefferson County for good.  Denver began the American Bison herd at Genesee in 1914.  They had been extinct here for 55 years, with no account of any ever hunted by the gold rushers in Jefferson County; they were gone by the time the gold rushers got here.  From the looks of the evidence it appears the buffalo of Jeffco’s area fell victim to a localized extinction in 1859 due to disease, which the Arapaho chief White Owl told of to folks in Denver in relating how his people had had difficulty getting food that summer.  Today Jeffco’s bison are alive and well and being provided to native tribes across the country.

Over time Golden has had various commemorations of him, including two hotels named the Cody Hotel.  These included the very same hotel he had visited, and the hotel that is now the Table Mountain Inn.  In 1919 the very first airplane to fly over Golden dropped flowers on Buffalo Bill’s grave.  A modern commemoration was the left panel of the Foss Mural painted by Robert Dafford in 1994, featuring Buffalo Bill with his horse, drinking a bottle of very original Coors sitting on the table.

On August 15-18, 1946 the very first Buffalo Bill Days was held in Golden.  The reason Buffalo Bill Days was created was to celebrate Buffalo Bill’s 100th birthday.  The 4-day event was greater even than that held today, which included a parade, contests, fireworks, bingo, and aerobatics.  After a hiatus the event returned in smaller form, while the trail ride began up Lookout Mountain in 1947.  Buffalo Bill Days was not a transformed Golden Days because for a time the two were celebrated side by side, but it did ultimately take its place as the community’s premier event of the year.  From its very beginning 76 years ago it has honored and celebrated Buffalo Bill, those who worked and performed with him and their cultures, and our colorful western heritage. 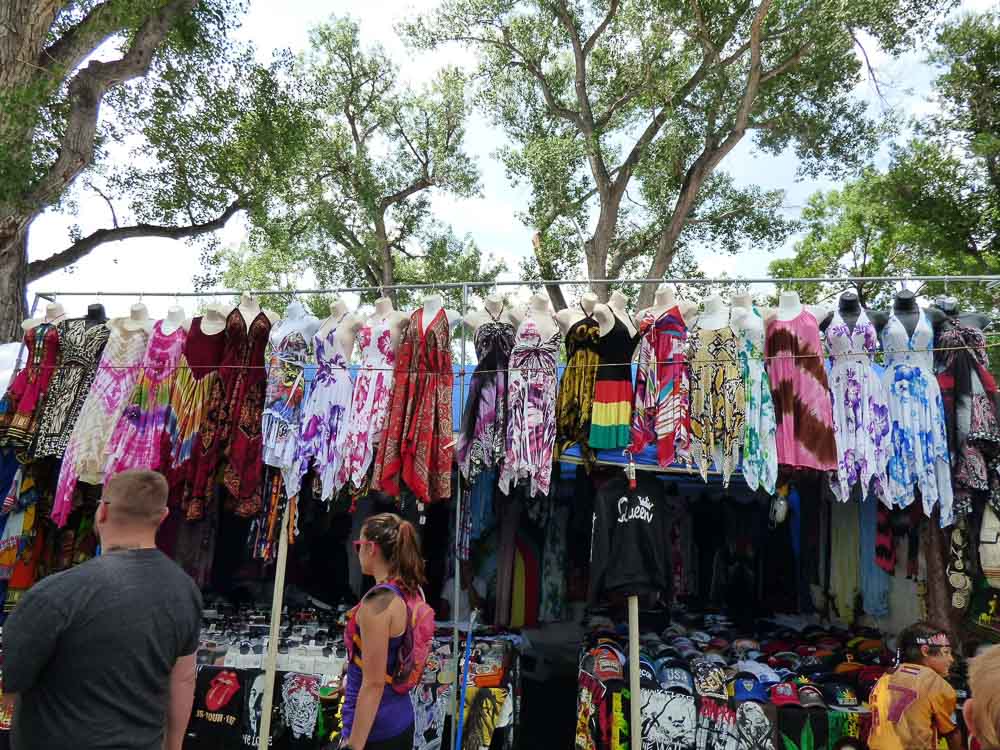 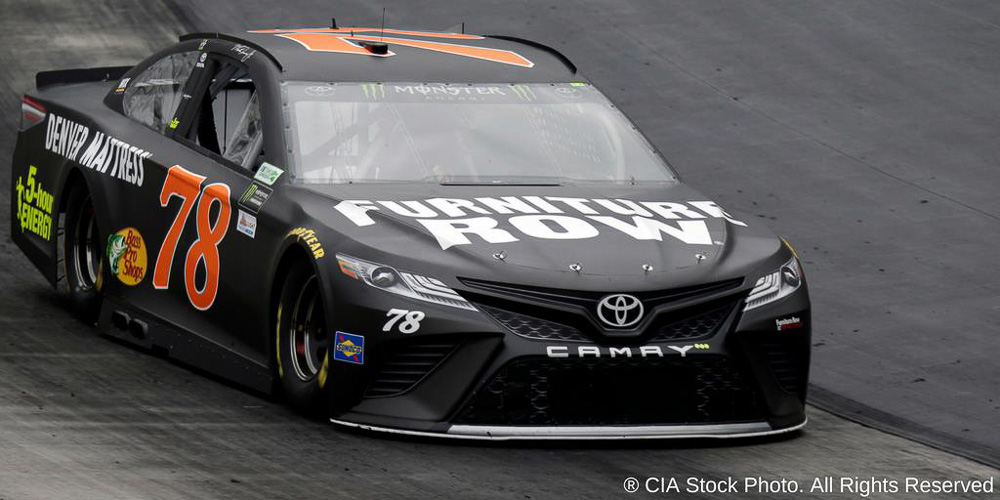 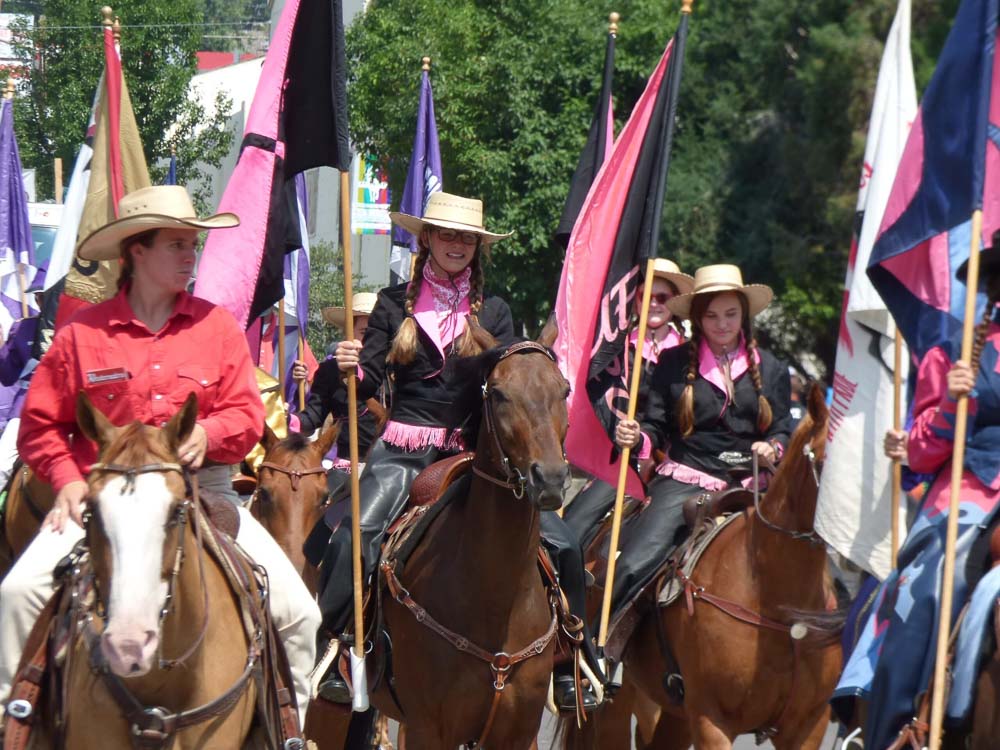 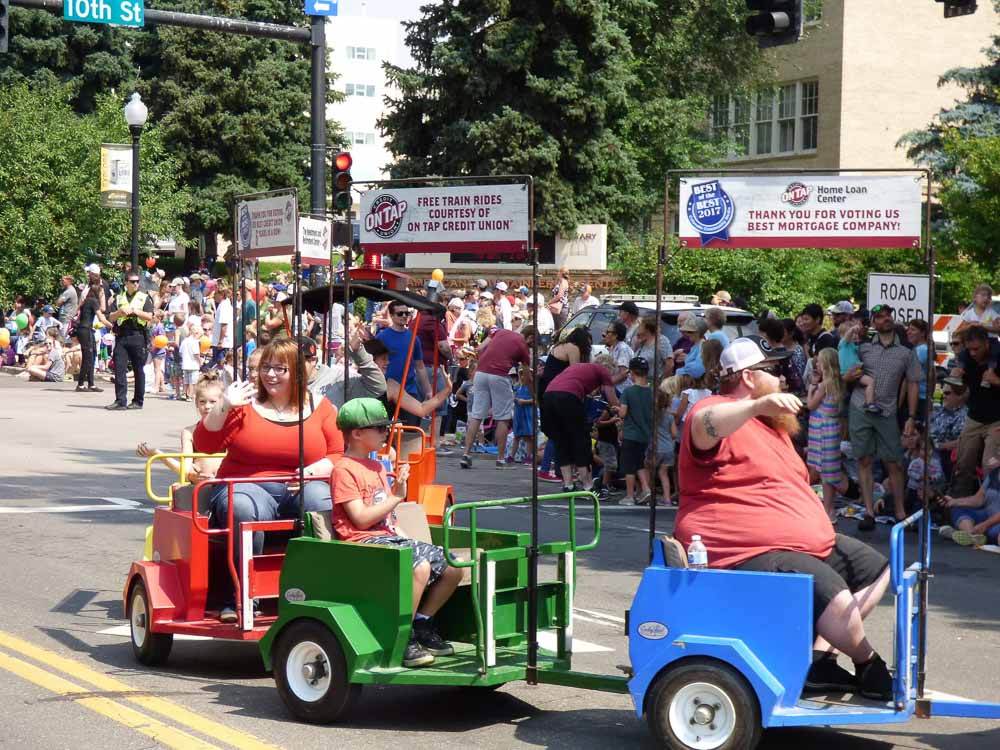 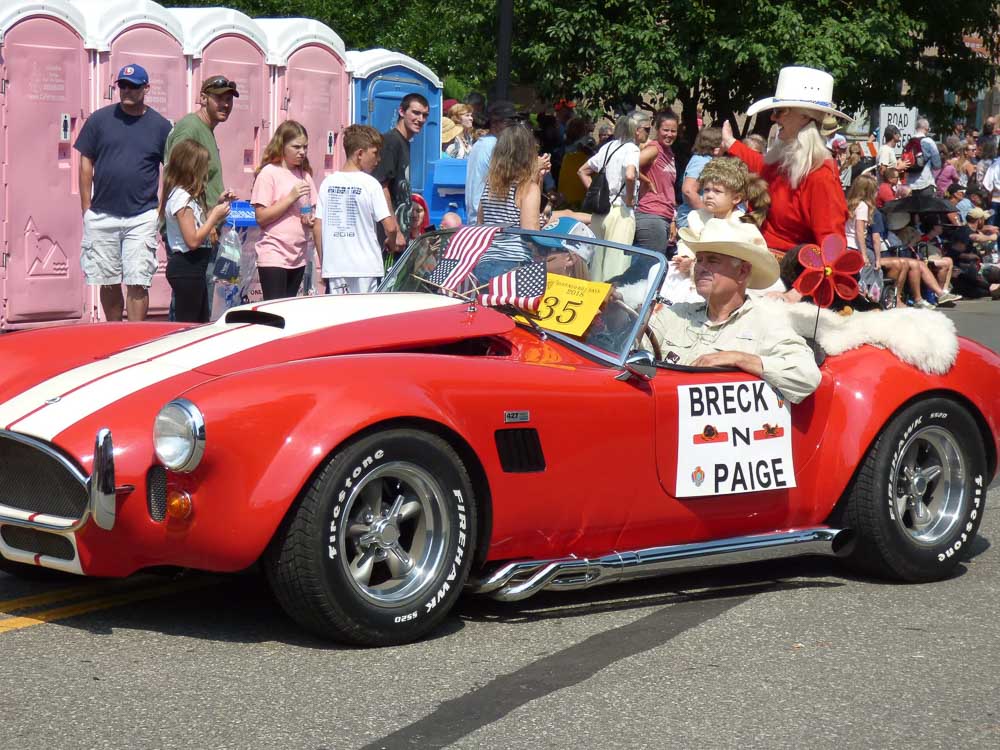 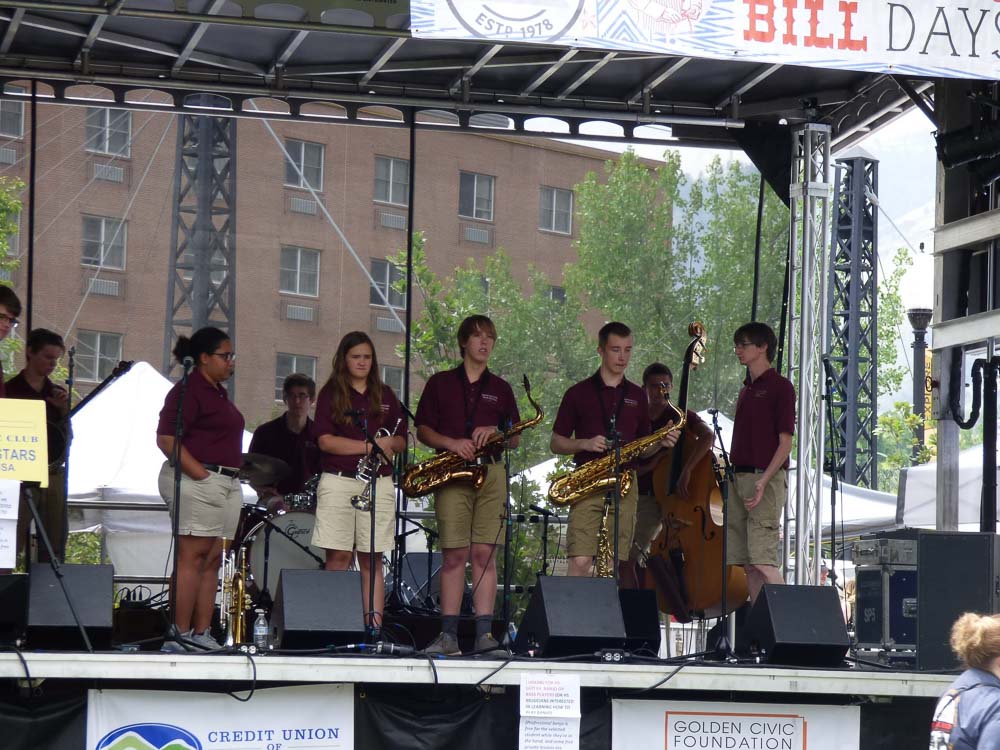 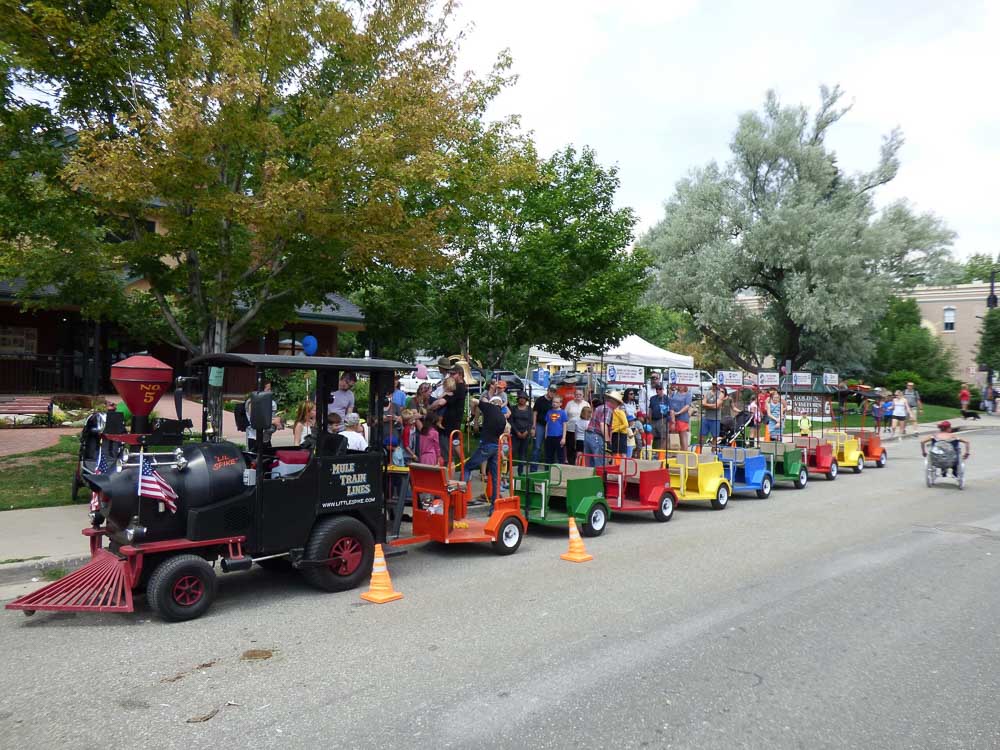 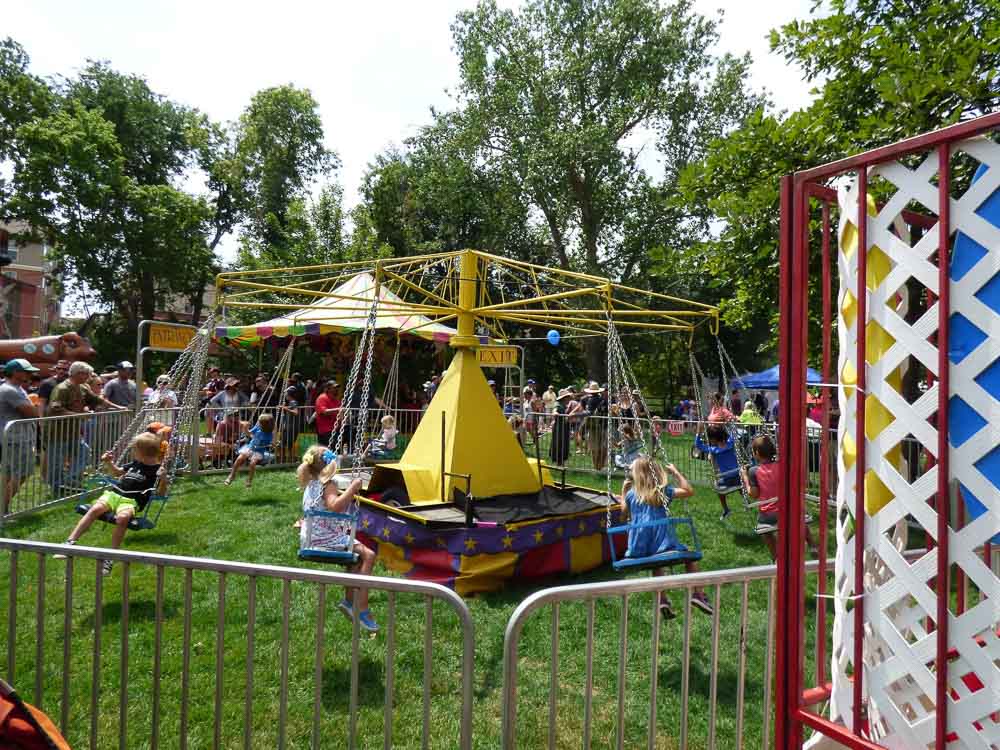 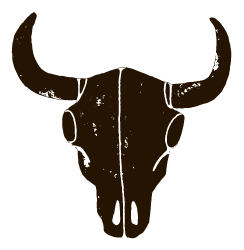